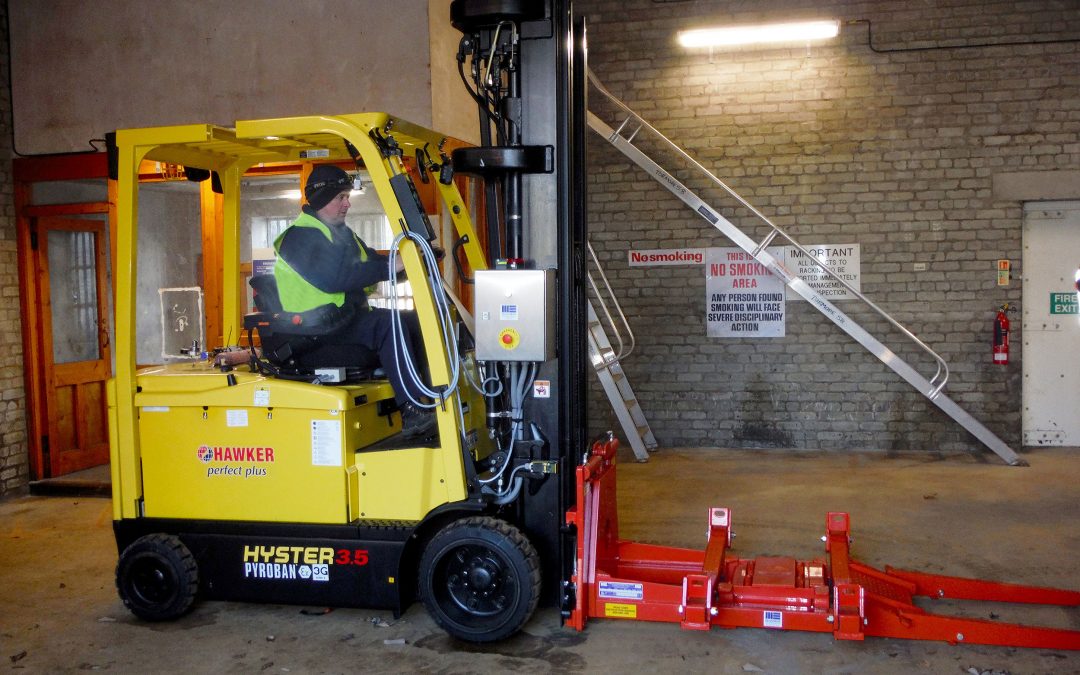 Chivas Brothers has introduced new explosion proof lift trucks to its whisky distillery in Tormore, nestled on the edge of the Cairngorms National Park in Scotland.  The new Hyster® lift trucks have been converted by Pyroban® to make drivers aware of flammable whisky vapours and shut down the equipment automatically if necessary.

“Our number one goal is safety” says Sandy Taylor, Warehouse Manager from Chivas Brothers. “This architecturally remarkable site at Tormore is both a distillery and storage facility, and due to the high volume of ethanol from the whisky maturation process, it is a COMAH* operation with Zone 2** hazardous areas.”

Casks from Chivas Brothers distilleries, are stored at the site to mature over many years.

“Lift trucks are central to the handling operation in our maturation warehouses, but they need to be specially protected to eliminate the risk of ignition in case a flammable atmosphere forms,” he says.

Pyroban protection on the lift trucks is central to Tormore’s safety management process which incorporates gas detection to alert drivers to the presence of a flammable atmosphere.

Rob Vesty from Pyroban explains: “When a mixture of potentially flammable vapour in the air is detected it initially gives an audible and visual warning to the driver but if the vapour and air mix approaches potentially explosive levels the system shuts down the protected equipment automatically.” 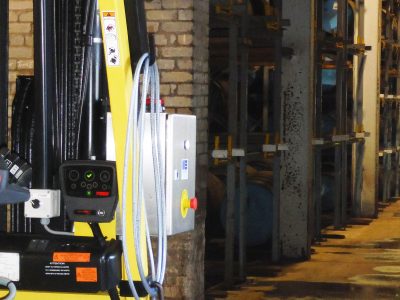 Gas detection is combined with various other explosion protection methods, such as restricted breathing enclosures and surface temperature cooling to ensure the engine, motors, brakes, electrics and other components remain below the auto-ignition temperatures of flammable materials. In this case T3 (200degC) temperature limitation for ethanol.

The Pyroban protected Hyster® E3.5XN complies with ATEX 2014/34/EU*** and is built in line with the latest EN1755:2015**** standard. This means that static, an ignition source, is now considered a “normal” occurrence in Zone 2 hazardous areas, so the tyres, seats, arm rests, hydraulic systems, and more are anti-static.

The lift trucks feature tall masts to service the high bays in the bonded warehouses together with specially designed rotators supplied by McGowan Engineering.  The explosion proof attachments clamp the casks for stacking in the warehouse, but it is also used to rotate them at different intervals during the maturation period. Stainless steel forks are also used for palletised work when required.

Supplied by Briggs Equipment the Hyster® trucks have been in operation for nearly a year. “They have worked extremely well,” says Sandy. “If there are any issues the local Briggs service engineer gives excellent support and is fully trained on the Pyroban safety systems.”

Briggs reports that it has two engineers within 30 minutes of most of the distilleries in Scotland. Robbie McKee, a Key Account Manager for Briggs explains: “The trucks are supplied as part of long-term hire agreement which includes an annual safety audit (ExASA) of the Pyroban system by ComPEX accredited engineers. This ensures maximum safety through the life of the explosion proof lift trucks.”

Built in 1958, Tormore is one of the most architecturally striking distilleries in Scotland and it makes every effort to reduce its impact on the environment and ensure the landscape will remain unaffected for generations to come.

** Zone 2 – a hazardous area classified as an atmosphere where a mixture of air and flammable substances in the form of gas, vapour or mist is not likely to occur in normal operation, but if it does occur, will persist for a short period only.

*** ATEX Directive 2014/34/EU of the European Parliament and of the Council of 26 February 2014 on the harmonisation of the laws of the Member States relating to equipment and protective systems intended for use in potentially explosive atmospheres.

****EN1755:2015 is a standard by which companies (like Pyroban) build or convert forklift trucks so that they are safe for operation in hazardous areas (zone 1, 2, 21, 22). It is titled “Safety of industrial trucks. Operation in potentially explosive atmospheres. Use in flammable gas, vapour, mist and dust”.