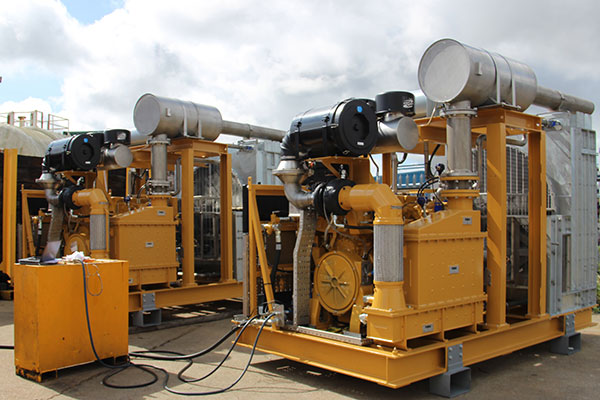 Destined for a production and pumping application in North Africa, the two HazPak™ units are built in accordance with ATEX and all necessary standards including EN1834-1:2000. With a 50 degree C ambient the radiators and surface temperature thermal signature have been under particular design scrutiny, with the thermal signature reduced with the application of Pyroban’s patented SCTB (Soft Compound Thermal Barrier) to the turbo compressor scrolls.

In addition to the “explosion proof” Pyroban kit the packages have been fitted with Pyroban’s Ex-SCS engine control system which not only protects the engines but also features additional analogue and digital inputs for monitoring pump oil temperature, bearing temperature and gearbox vibration, all items commonly encountered on API pumps.

Pyroban has supplied the radiator to gearbox coupling and integrated the Ex-SCS system into the ATEX powerpack package known as a HazPak™. The pump packager will then integrate the complete HazPak and control system with their sub-base, speed increasing gearbox and centrifugal pump. String tests are due to be completed later in the year (2021).

Pyroban has collaborated with the NOC client and EPC to ensure that the specification and documentation requirements have been adhered to.

Ex-SCS helps operators take an active approach to the overall safety system and combines safety shutdown with diesel engine control and monitoring. Gas detection is introduced into the engine inlet tract at a certified position and also within the equipment DNV 2.7-1 enclosure. The ATEX engine control system features infrared gas detection and is a 100% stand-alone safety control system for ATEX 2014/34/EU compliance.

A safety shutdown is then triggered on detection of a flammable gas in the engine air inlet or in the atmosphere, diesel engine over speed, high exhaust gas and coolant temperatures, low oil pressure or if there is a manual emergency stop activation for example.

Pyroban’s Ex-SCS provides an active approach to safety by combining flame arrestor elimination, safety shutdown and diesel engine control and monitoring into one flexible package that can be integrated with the local DCS. 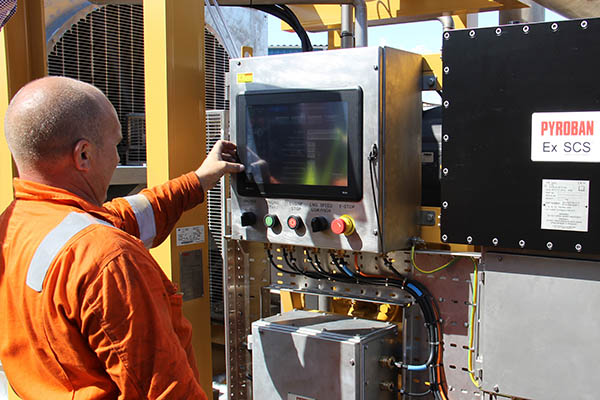 A colour 15” touchscreen HMI displays the current safety status and the diesel engine control and monitoring screens can also be integrated. For example equipment controls, pump sensors, as well as fire and smoke detectors can all be fed into Ex-SCS.

This API centrifugal pump application features the 15” screen which gives an enhanced viewing and control experience for operators working offshore in often difficult environments. Viewable under direct sunlight the resistive touch screen is operable with a gloved hand. It’s ideal where there are few restrictions on control panel size and permits a clearer layout.

Ex-SCS brings down the maintenance costs of ATEX engines

In addition to the Ex-SCS control system, the explosion proof engine package from Pyroban includes an air intake shut-off valve, ATEX certified spark arrestor, water-cooled turbocharger, exhaust manifold as well as an exhaust gas heat exchanger and other components. There is no plate type exhaust flame arrestor typically associated with daily cleaning to unclog the build up of soot from the exhaust system.

No plate type exhaust flame arrestor is an important feature for applications using Ex-SCS as it reduces maintenance costs and gives operators the assurance of ongoing safety through the life of equipment. It means there is no reliance on an exhaust flame arrestor being fitted when in operation – which can sometimes be dangerously swapped out for a “dummy”. Manual handling issues also disappear.

Ex-SCS is available for ATEX engine packages and Pyroban kits for engine brands such as Caterpillar, Cummins, JCB, Volvo, DDC, MTU, Perkins and more. All Pyroban Kits and HazPak packages are designed and manufactured to be robust and reliable in harsh operating conditions and corrosive environments found in the oil and gas industry