Why we “explode” our flameproof products in regular tests at Pyroban

If you have ever had the experience of visiting the Pyroban facility in Shoreham by Sea, UK, you will understand the lengths that Pyroban goes to when converting a forklift or engine for use in a potentially explosive atmosphere. You may also remember seeing an explosion.

Part of the Pyroban design process involves rigorous onsite testing called “Flame non-transmission” testing, but what is it and why is it important?

Flame non-transmission testing refers to the testing of Ex d flameproof enclosures which are common on our forklift conversions for Zone 1 hazardous areas and also our passive solutions for Zone 2. The inlet and exhaust systems of diesel engines in both forklifts and Zone 2 Pyroban engine kits and packages for offshore well service equipment require similar testing.

What is an Ex d enclosure?

An Ex d enclosure is (in simple terms) a box that surrounds a component such as a motor, relays, switches and is also used to describe the inlet or exhaust systems of an engine protected by flame arrestors.

The main design feature is that it will contain an explosion and stop any flames escaping into the surrounding atmosphere should an internal explosion occur.

How does an Ex d enclosure work?

The Ex d enclosures are designed to hold an explosion whilst releasing the high pressures safely to atmosphere through a design feature called a flame path. Therefore, the integrity of the flame path is extremely important, any deviation, faults in manufacture, or damage during maintenance could allow flames to be released into the surrounding explosive mixture.

Traditional flame paths are typically integrated into the outer edges where the enclosure lid fits onto the body and on the faces of threads of cable glands into the enclosure. For engines the main flame paths are the specially designed flame arrestors installed in the systems to allow the engine to “breathe” whilst preventing flames passing through. As the complete flame proof system is tested, it’s important to always replace with OEM parts and not mix and match with other brands.

What are the standards for Ex d enclosures?

This means that any product featuring Ex d enclosures should follow these standards.

In addition to the design, the International Electrotechnical Commission (IEC) Standard 60079-1 has requirements for testing flameproof enclosures to ensure that there is no transmission of an internal explosion.

This means that in all new designs or where there is significant modification to the design,  the manufacturer of the flameproof system has to conduct flame non-transmission testing in order to comply with the standards and ATEX 2014/34/EU.

So what is flame non-transmission testing?

The Ex d enclosure must be filled with a defined flammable gas/air mixture and ignited.  The test must prove that the flame cannot reach the atmosphere, which is also filled with the same explosive mixture.  The test is repeated 10 times to ensure consistent performance and that the enclosure has not suffered mechanical failure or distortion due to the high explosion pressures sustained.

Pyroban is unique because we have onsite testing facilities at the manufacturing plant in Shoreham by Sea, West Sussex, UK.  This means that we can do everything according to the standards without having to wait for a testing house to do it for us or skipping this step (which we believe may be the case for some manufacturers).

Our testing process involves purging and igniting the enclosures the required ten times and using slow motion cameras and other technology to prove the design in accordance with the standards.

In the past, our factory tours would demonstrate a “pass” and then a “fail” which was always spectacular due to the power of the explosion seen (and felt) by a fail. 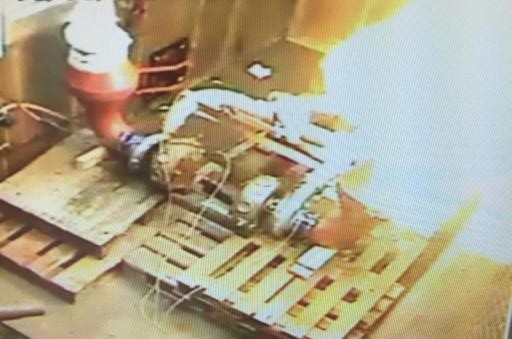 Aren’t there enough safety margins in the standards not to test every new design ?

Whilst traditional Ex d enclosures look impressive being constructed with thick material, large welds and many fixings etc. and flameproof engine systems have large flame arrestors in the inlet and exhaust systems, evidence shows that the energy produced within the flameproof system cannot be predicted sufficiently to justify not testing a new design.  How an Ex d enclosure is populated for a forklift truck conversion can generate significantly higher explosion energy than the enclosure can withstand due to a phenomenon called Pressure Piling.  Similarly, in engine systems adding a single 90 degree bend in the system can double the speed of the flame which may then not be stopped by the flame arrestor.  For engine systems, the original engine parts may form part of the flame proof enclosure and may not be strong enough when tested.

The images show you can’t guarantee an impressive-looking system will perform as expected even if it’s similar to a previous design.

Where to find proof that this test has taken place

Firstly, all Pyroban products comply according to all standards without compromise. This is a fundamental brand value and belief that there are no short cuts when it comes to safety within a potentially explosive atmosphere.

Inside the technical construction file of each Pyroban conversion, there will be proof that this testing has taken place.

All manufacturers should be able to provide this important evidence that the Ex d enclosure will perform as intended in case of a release of hydrocarbons on an oil rig, for example. If not, then questions should be asked as to the quality of the system and subsequent safety of the equipment in operation.  That’s why we invested in our on-site facility many years ago so we can supply new solutions in short lead times and with evidence to support the final certificate which you receive.