The team at Pyroban recently hosted a socially-distanced, Covid-secure Pinewood Derby, a competition where entrants make a 180mm long wooden car and race them down a 15m wooden track.

Pinewood derbies are often organised by cub scout groups and have been running for more than 30 years. Senior Mechanical Engineer at Pyroban Marco Holt found out about the competition while helping his son’s cub scout group. This gave STEM ambassador Marco the inspiration to run competitions at local schools and more recently at Pyroban.

Entry was open to anyone working at the Pyroban factory in Shoreham by Sea, West Sussex in the UK. Entrants were encouraged to build an aerodynamic car with the help of their children or other family members. Some spent weeks perfecting their designs which had to pass a strict set of engineering rules and inspection. 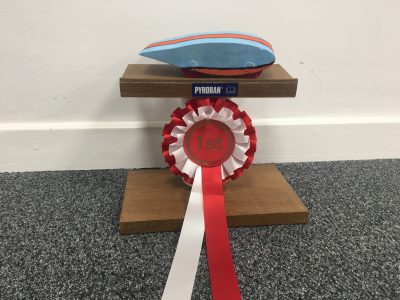 There were 19 entrants in the end and their cars had to qualify during heats to make it to the finals at the Pyroban facility. A summary of the heats and the live final was then shared on MS Teams on Monday 23rd November.

There was stiff competition with Darren Perks, an Applications Engineer in Pyroban’s oil and gas team winning by a split second with his red and blue car called “Foiled Again”.

Inspiring the next generation of Engineers

For many years, Pyroban has supported STEM and the IMechE by attending careers fairs and events in local schools to promote the benefits of careers in engineering to young people. The object of the STEM (Science, Technology, Engineering and Mathematics) initiatives is to inform young people of the wide range of interesting career opportunities available.

Marco has been actively involved in schools outreach for Pyroban for more than 10 years as a STEM Ambassador with IMechE and STEM Sussex. 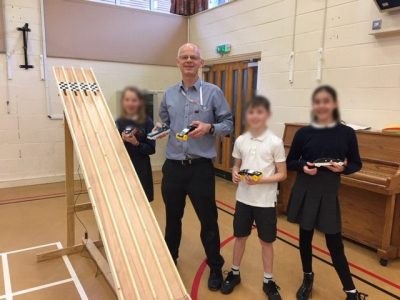 Earlier this year Marco ran a Pinewood Derby event at a local school to all 4 classes of year 6 (10 to 11 year olds).

Pyroban, based in Shoreham by Sea, West Sussex, UK is keen to contribute to the community and attract talented students to fill demanding and fulfilling engineering roles.