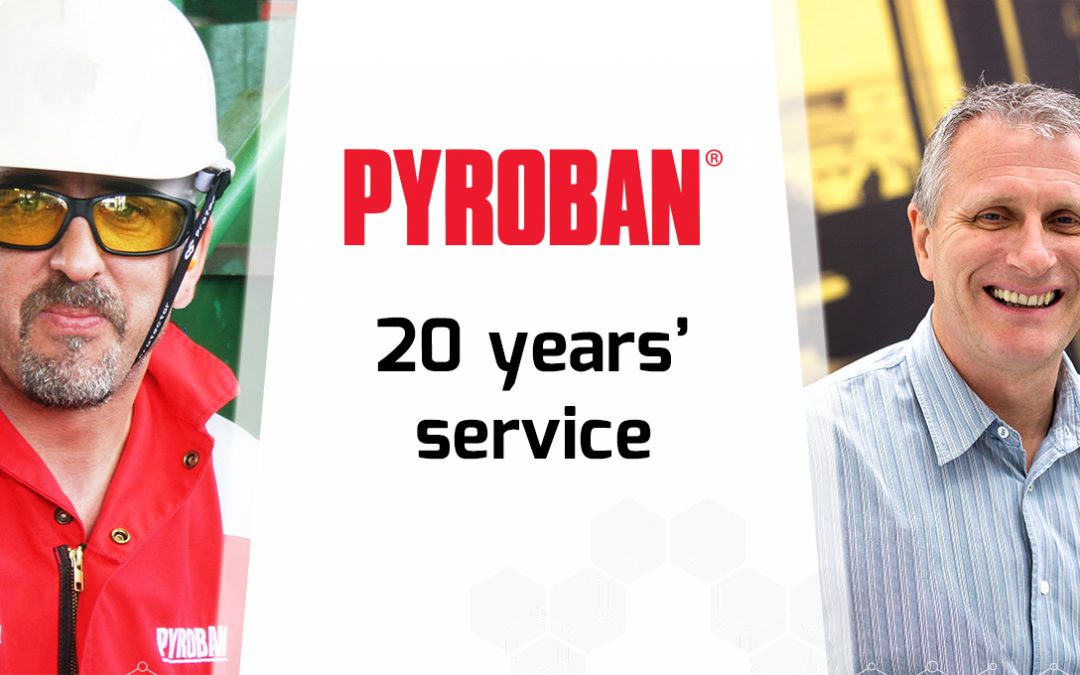 We are pleased to celebrate both Marlon Parbery and Rob Vesty’s 20th anniversary of becoming part of the Pyroban Group.

Marlon (pictured left) started his journey as a Diesel Forklift Truck Fitter at the Pyroban headquarters in Shoreham by Sea in West Sussex, UK and Rob began as Sales Account Manager serving the North of England from his base in Nottingham.

“Back in the early 2000s, lift truck technology was understandably not as advanced as it is today and the market has changed considerably since then,” says Marlon, explaining that he has converted hundreds of explosion proof forklifts in his time at Pyroban.

“Back then, we were converting a large range of diesel trucks for Zone 1 featuring either air start with pneumatic control systems or with very basic electrical systems,” Marlon continues. “Today, diesel trucks have evolved, as has Pyroban with new progressive advanced automotive technologies.”

Fast forward to 2020, now Pyroban’s Sales Manager for the UK and Ireland, Rob Vesty has seen vast industry developments which have changed his role over the years, allowing him to gain a keen insight and understanding of OEM needs and requirements, matching the best technologies and solutions whilst delivering the best value for money and uptime.

“I’ve definitely seen an increased demand for end user site visits over the years, which has enabled me and the team to provide the best level of support to both the equipment dealer and end user in each contract,” says Rob. “Afterall, every application is different, which keeps it interesting.”

Marlon’s role has also evolved, taking him around the world the likes of Borneo, India, Tehran, Angola, Libya and Azerbaijan whilst commissioning, building and repairing offshore diesel engine packages. After more than 20 years’ experience with Pyroban in the factory and field, and on both sides of the Pyroban business (oil and gas and materials handling), Marlon has been appointed to the role of Pyroban Service Team Leader.

“The most satisfying part of my job is that I get to help customers repair and maintain vital equipment that makes a real difference to safety in tough applications,” says Marlon. “I get to work as part of an amazing team to solve any customer issues. It’s a great challenge in a great business.”

We thank Rob and Marlon for their continued support and congratulate Marlon on his new position.

Read more about Pyroban’s history with a project that started back in 1969 following an explosion.